Where are airport stations?

Why can’t I use an airport station for conditions? I hate these PWS stations. They are undependable and unreliable. When I try to put in an airport station like KEUF for Eufaula AL or Montgomery (KMGM) AL, they don’t appear in the stations available. None of the official stations for Alabama show up in my lists. Is there somewhere I’m missing that’s filtering out official stations so I only see these PWSs? It didn’t used to be like this.

WeatherBug does have the weather data for many airport weather stations. Weather Underground used to have weather data for those stations too, but they mysteriously disappeared from their service recently. I haven’t been able to get an answer from them as to what happened to them.

The update at least restored the official NWS stations. I can see the Montgomery AL airport now. Unfortunately, it hasn’t helped me. I live in Eufaula AL, and the airport has an AWOS station, but it’s not an official station. It used to show in the list, but now I only have the WU PWS stations. Can you list AWOS and other airport stations that aren’t official NWS stations? I hate these PWS stations since many of them show wildly different observations.

I’m certain that WU dumped all the NWS stations so you only have the choice of using their PWS network. That’s how they make money. The more people using those stations, the more apparent users they have, and the more they can charge advertisers. Five years or so ago, WU was my main weather source. Since it was purchased by IBM it has gone straight downhill. I can’t imagine how many users they have lost, so the PWS network is all they have left.

It looks like it’s an official station, but there is no current data on NWS’s website for some reason.

WeatherBug has a station for KEUF. You can see their data matches what is displayed at NOAA: 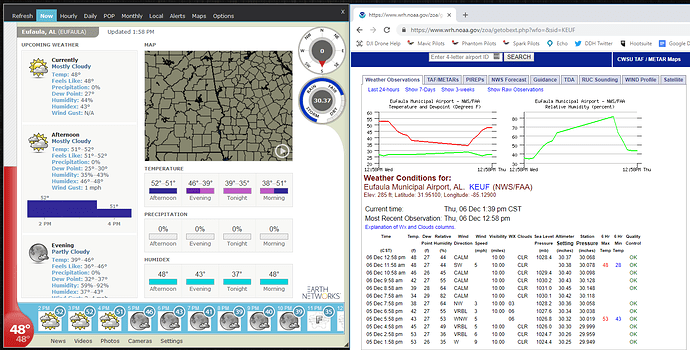